Robert H. Fritz III received his B.B.A. from the University of

Texas and his law degree from South Texas Collage of Law, where he was recognized for excellence. He has concentrated in the handling of injury and death cases for the past twenty five years. Robert is a pilot and is versed in Aviation Injury.

Robert has gained recognition from other attorneys by being awarded the coveted “AV” rating, the highest rating available from Martindale-Hubbell confirming his legal abilities as being of the very highest standard. He has been inducted as a member of the prestigious college of the State Bar of Texas. Only 4.7 percent of all Texas Lawyers or only 4,000 of 83,596 lawyers are members of The College of the State Bar of Texas. 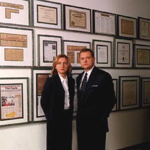